Nectar Sleep launched stateside in 2017, and has since grown into one of the most well-known mattress brands in the game. Given its success in the United States, it was only a matter of time before it branched out into other markets, which it did in September 2018 by unveiling its very first bed specifically designed for sleepers in the UK.

While the UK version of the Nectar mattress is certainly similar to the original U.S. one, it also features some unique characteristics that make it a wholly different bed. Curious to know what these changes are? Well then you better continue reading below for my full Nectar UK bed review.

Don’t have time to read it all? Click here to skip to the bottom and check out my review summary.

Since it burst onto the scene, Nectar Sleep has utilized a strategy of clever advertisements and focused product development to secure its spot as one of the most popular brands in the online bed-in-a-box market.

Considering its name recognition, the brand is often compared to two other well-known entities in the sphere: Casper and Leesa. Though these models have totally distinct vibes (which we’ll dig into later on in this review), they all share a similar level of clout in the industry as well as constructions built entirely of foam.

But let’s get back to this Nectar UK bed review. As I mentioned above, the Nectar is an all-foam bed featuring two thick layers of memory foam overlaying a base of poly foam. This produces a medium firm feel with a ton of body contouring and sinkage, which is a similar vibe to that of the U.S. model. However, the UK version also implements some zoned support in the base, included to bring targeted relief to the shoulders and hips.

But enough chat! Let’s dive into the bed.

Cover – The cover is made with a special “Adaptive Cooling” knit fabric, which cools the sleeper down throughout the night. It’s got a thick, cozy feel to it, so should provide some immediate comfort as you lie on the bed.

Comfort Layer – Directly below the cover, you’ll encounter a section of memory foam. This material has a slow response to pressure, allowing the sleeper to really sink in for some satisfying pressure relief. As the foam contours to the curves of your body, you’re likely to feel as though you’re sleeping more “in” the bed than “on top” of it, which could really work for side sleepers in need of some cushiony support at the shoulders and hips.

Contour Layer – Next up, you’ll find another layer of memory foam, which helps to draw the contouring of the top layer even further into the mattress. And while such a thick top section of memory foam would normally result in overheating, Nectar has mitigated that with some special cooling properties.

Foundation Layer – Rounding out the construction we’ve got a layer of high-density poly foam. This section gives the bed its stability and shape, providing a firm foundation upon which the softer foams can react. It’s also outfitted with some zoned support channels at the shoulders and hips, which helps to bolster these sensitive spots with targeted sinkage. The channels also encourage airflow throughout the structure, resulting in some nice breathability.

After taking a look at the construction of the Nectar UK, let’s chat about the firmness and feel. When I hopped on the mattress, the first thing I noticed was the top layers of memory foam contouring to my shoulders and hips. As I pressed in further, I could really feel my body sinking into these layers for some fantastic pressure relief.

Since folks of different body types and sizes are going to feel firmness differently, I decided to bring in three other testers to check out the Nectar Sleep mattress. We all took a turn lying on the mattress, gave it a personal rating, and then compiled them on the graph below.

While feel is always going to be a personal thing, our responses should provide you with a good idea of the firmness range you can expect from the bed.

Though there was a bit of variance with our responses, we did land on an average firmness rating of 6.9. When compared to the industry standard of 6.5 for medium firmness, it seems this bed is a touch on the firmer side.

I personally gave the Nectar a 6 as I found its memory foam layers produced a gentle vibe. No matter the position I stretched out in, the material contoured to the curves of my body for some intense sinkage and pressure relief. While this made for a softer feel for me, some sleepers may find memory foam to produce a firmer feel as their bodies gradually acclimate to its morphing shape.

For comparison’s sake, the U.S. version of the Nectar got an average rating of 6.5 from my testers, so has about the same firmness as the UK model.

Another important component of a new bed’s feel is pressure, or more specifically where pressure points are likely to form while lying on top of it.

To help you visualize where these tension spots might crop up, I placed a pressure map on top of the mattress and lied on my back, side, and stomach. You can see the results on the image below where pressure is represented from blue (low pressure) to red (high pressure).

Back – Starting off on my back, I felt some really nice pressure relief as the memory foam filled in the space at my lumbar region. Though many folks may find memory foam to have an initially firm feel, once you give your body a few minutes to sink through it, you’ll likely experience its pressure-relieving give. Unfortunately, this deep body contouring does mean that it’s difficult to move around and change positions on the Nectar UK.

Edge Support – Testing out the edge support on this bed, I did detect some compression through the memory foam layers. However, the high-density poly foam base did a good job of supporting my weight, which made me feel secure in this position.

Side – On my side, I continued to feel wonderful pressure relief from the Nectar. Strict side sleepers usually go for softer mattresses that contour to their shoulders and hips, so if you fall into that category, I think you’d find a lot to love in this bed, especially considering its extra zoned support.

Stomach – That being said, stomach sleepers are pretty much the opposite of side sleepers in that they need firm structures that keep their shoulders and hips in an even alignment. As I sank through the memory foam, I could feel it distorting my spine into a slightly uncomfortable position.

Nitty-gritty details of the Nectar UK aside, let’s open up the conversation a bit to include some of its biggest competition on the scene. While every mattress is going to feature unique characteristics that make it a distinct product in the space, I think it can be useful to size up these differences against other models. Plus, who wants to buy an expensive bed without doing a little cross-referencing beforehand?

As I mentioned up top, the two brands we’ll be focusing on here are Casper and Leesa, giants in the online mattress sphere who have also expanded from the United States into the United Kingdom.

Though both the Casper and Nectar feature all-foam constructions with zoned support in their foundational layers, they actually have surprisingly different feels.

Again, while the Leesa and Nectar are both entirely built of foam, they have distinct vibes that make them great for different types of sleepers. 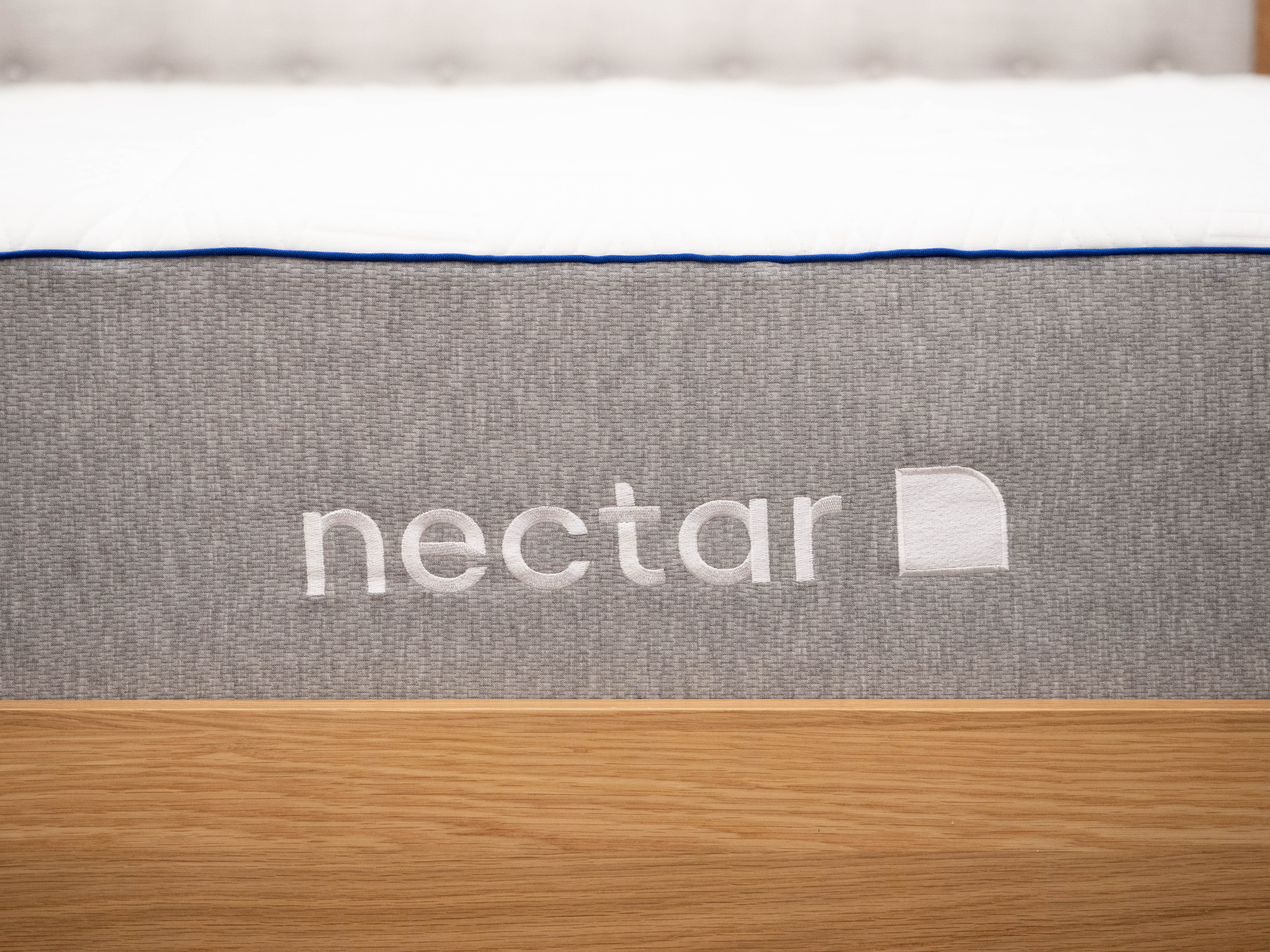 Up next, let’s take a look at motion transfer. This test will demonstrate the amount of disturbance detectable from one side of the bed to the other, which could be especially important for those of you who sleep with a bed mate.

FYI: Each drop is meant to symbolize a different movement you’re likely to experience in bed, from tossing and turning (4”) to getting out of bed (8”) all the way to full on jumping (12”).

I think these are pretty impressive motion transfer results! The thick layers of memory foam do a fantastic job of absorbing and dampening movement across the structure, so you’re not likely to be too disturbed by your partner’s tossing and turning in the night.

The variations in size, weight and density are meant to simulate different body parts and different sized sleepers.

If you’ve been paying attention, these results shouldn’t surprise you too much, as they sync up nicely with how I experienced the bed, which is to say they demonstrate some pretty intense sinkage thanks to the thick layers of memory foam up top. That being said, these measurements confirm that you’re most likely to feel more “in” the Nectar UK than “on top” of it.

Just getting started? Begin your mattress search with my mattress reviews breakdown.

If you’re convinced the Nectar is the right mattress for you, the size and pricing information for the mattress are below. Please note that these prices reflect standard pricing, but coupons are often available.

IS THE NECTAR UK MATTRESS RIGHT FOR YOU?

Now that we’ve taken a closer look at the mattress, I want to provide you with a few recommendations and some of the most common Nectar complaints:

For more information on the Nectar UK, visit its website here! 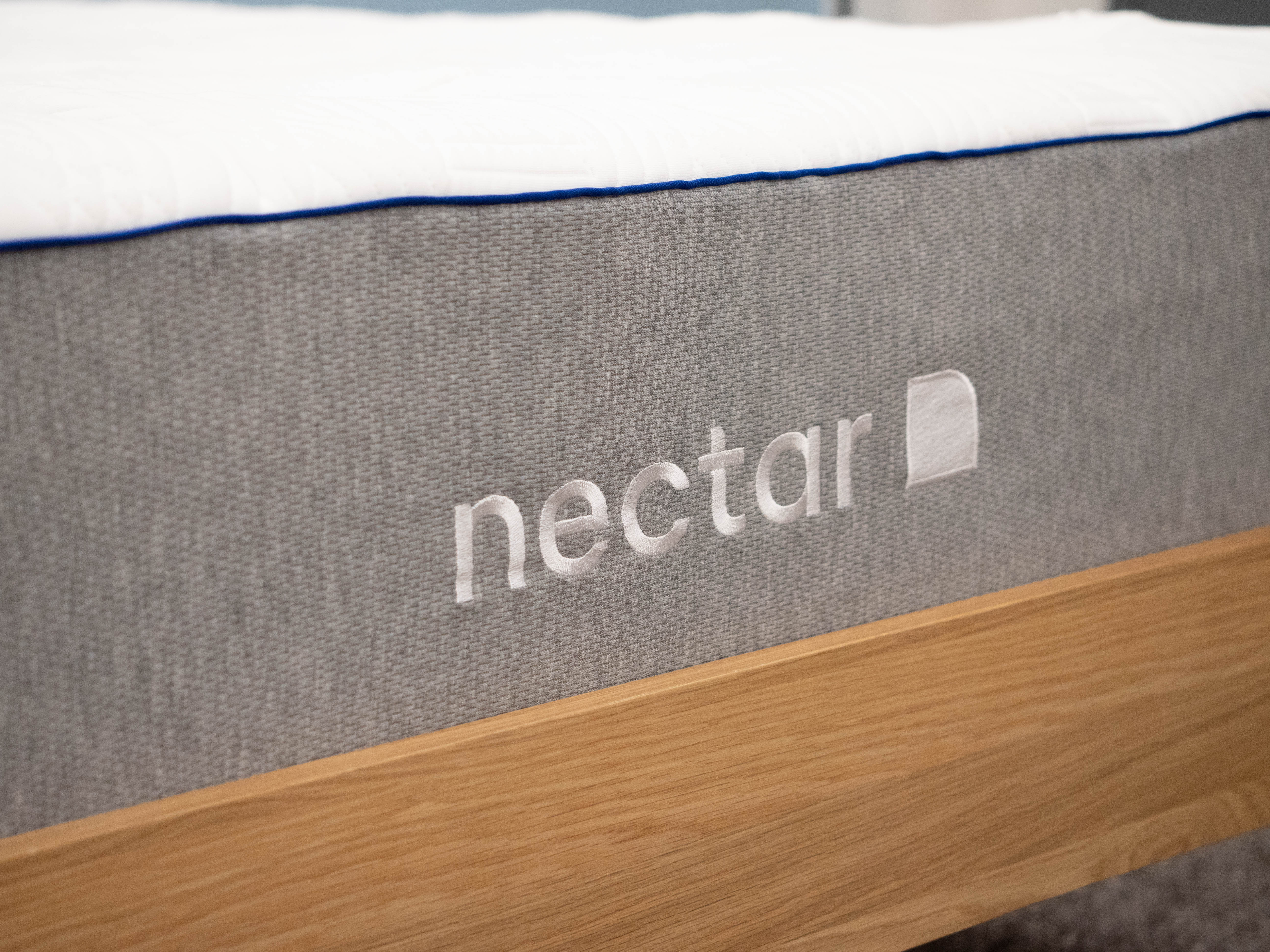 Eve – great for most sleepers
Save £50 – Use Code SLEEPOPOLIS50

Have a question about a mattress? Send me a message via my contact form. I’d be happy to answer and help you out!

Looking to save a few quid on your new mattress? We can help!

Hello, welcome to Sleepopolis UK! We are committed to bringing you the most comprehensive information on the web about sleep, everything from mattress reviews to sleep tips. Hop over to our About page to learn more about who we are.

This website uses cookies to improve your experience while you navigate through the website. Out of these, the cookies that are categorized as necessary are stored on your browser as they are essential for the working of basic functionalities of the website. We also use third-party cookies that help us analyze and understand how you use this website. These cookies will be stored in your browser only with your consent. You also have the option to opt-out of these cookies. But opting out of some of these cookies may affect your browsing experience.
Necessary Always Enabled

Any cookies that may not be particularly necessary for the website to function and is used specifically to collect user personal data via analytics, ads, other embedded contents are termed as non-necessary cookies. It is mandatory to procure user consent prior to running these cookies on your website.